Home / Blogs / Where It All Began: A Conversation with Fran Flanigan, Executive Director from 1978 – 2001

Where It All Began: A Conversation with Fran Flanigan, Executive Director from 1978 – 2001 For the last three and a half years, I have had the privilege of getting to know Fran Flanigan, a woman ahead of her time.

Fran and I sat down to share a conversation about the history of the Alliance. I was curious about Fran’s background and how she came to this work. Fran recalled that in the mid-1970’s she was raising her two daughters in Baltimore, but wanted to get involved to help her community. She started volunteering with the Women’s League of Voters, where she met Ajax Eastman, Gerry Gallagher, and Merilyn Reeves, founding Board members at the Alliance for the Chesapeake Bay.

“I was involved in the Women’s League of Voters.. And they wanted to know what I was interested in and I really didn’t really know. But a friend of mine said ‘you know this is going to be the decade of the environment and I said ‘okay, I’m interested in the environment’ And I did not know much. So it’s been a great learning experience. But that was really the start of it.”

It was truly happenstance that Fran got started in environmental work – but she is known as a visionary leader who has always had the ability to look around the next corner.

Fran and I both share a love of facilitating meetings that bring different perspectives to the table to wrestle through identifying problems and potential solutions. Known for her facilitation skills, I had to ask Fran about how the plan for the initial 1983 Chesapeake Bay Agreement was formed, to which she replied: “I wasn’t helping put together the agenda, I was the agenda!” It was no small feat to bring together over 700 people from Maryland, Virginia, Washington DC, and Pennsylvania for three days, including researchers, legislators, volunteers, academics, local, state, and federal government agencies. Fran confessed that this meeting was one of her favorite moments during her 23 year career at the Alliance. “It was new to everyone at that point, so I didn’t feel a real disadvantage because we were all learning at the same time…including EPA….so we were all in the same boat.”

By the time the Alliance was formed in 1971, the Chesapeake Bay Foundation had already been in existence for four years and the newly formed Environmental Protection Agency (US EPA) was less than a year old. Fran recalled a few of our founders, who have long since passed, but mostly recalled that the Citizens Program for the Chesapeake Bay (our name from 1971 – 1978) was formed by concerned citizens from Hampton Roads, Virginia and Baltimore, Maryland. The founders of the Alliance felt that bringing stakeholders together to solve problems was the only way to a cleaner Bay.

“Our goal is to reach out to people and build bridges and to get acquainted with the different groups that affect the quality of the bay and who needs to be involved if we are really going to do something about it.” – Fran Flanigan on the core values of the Alliance’s work.

For the last three years, I have personally connected with Fran letting her know who we are honoring with the year’s “Fran Flanigan Environmental Leadership Award.” Every year she inevitably mentions how almost 20 years later she still feels like it’s silly to have an award named after her. Her humility is limitless, and I often channel Fran’s practical and level headed approach to the Alliance’s work.

As we approached the end of our conversation, I was reminded again that Fran was a true pioneer in the wilderness, and a strong female leader in the environmental sector. She didn’t have preconceived notions about the need for advanced degrees or years of research to give her the credit to lead. She simply understood that when solving some of the world’s most complex problems, it doesn’t matter where you start, but rather that you begin. Fran began, and I have the privilege to continue the legacy she started. When I asked Fran about what advice she would give to men working alongside women, she said “Pay attention, we are good at this stuff.” (Photo from 1983). 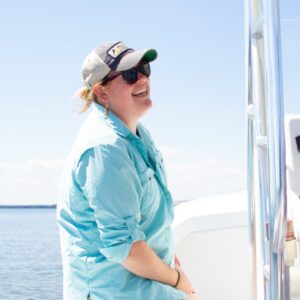