Hopefully, one of the first things that comes to your mind are the wildlife that call the Bay home.

The Bay boasts an abundance of fascinating species that spend their entire lives in the watershed. Other species may pass through during their migrations, or call the Bay home in the winter or summer. Some species inhabit the land, some the water, and many spend time in or on both.

This list of 10 of my favorite Chesapeake Bay species aims to bring you a little closer to these magnificent critters with which we share the environment. All of the photos have been taken by me in the Chesapeake Bay watershed, where I spend most of my time.

My goal is to bring you into the intimate lives of these species, share interesting facts about their behavior, ecology, and habitats, and forge a connection with all things wild – in the hopes that you will learn something about our environment and take that into your daily life, incorporating environmental stewardship in ways you had not previously contemplated.

Together, we are capable of implementing great change, and with the work that the Alliance for the Chesapeake Bay and many other organizations and individuals across the watershed are doing, we are moving the needle in a positive direction for our feathered, furry, and scaly friends.

This list is by no means exhaustive, and it was quite difficult to narrow it down to only 10 species. However, I feel that each species here presents its own special characteristics and plays an important role in the complex ecology of our natural world. There is also a bit of levity woven into the species profiles, a sort of wildlife humor that I hope you can appreciate.

Without further ado, I present to you: Jack Wildlife’s Top 10 Species of the Chesapeake Bay. 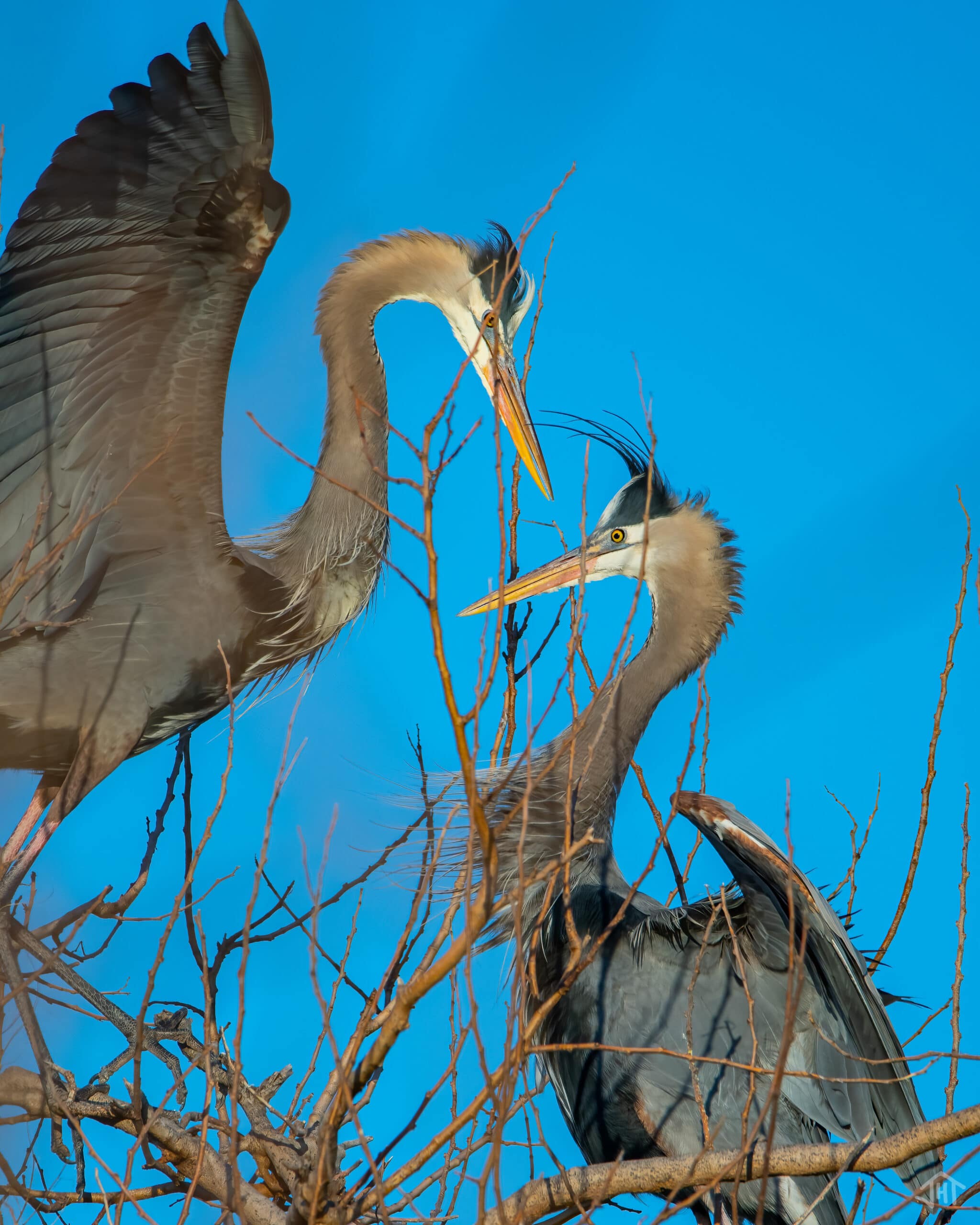 Yes, we are all probably familiar with these striking birds, an iconic Chesapeake Bay species that can be seen hanging around virtually any body of water. However, did you know that blue herons have special feathers on their chest that constantly grow out and deteriorate into a powder-like down? The birds use this substance to clean off fish slime and oils after a meal, similar to how we would use a bib or napkin.

Did you know that both blue heron parents help to incubate their eggs, and with caring for the young nestlings? This is actually quite common in the bird world. Talk about sharing responsibilities!

Oftentimes, herons are referred to as ‘cranes’, which is not technically accurate. Cranes are a different type of bird – one way to tell if you are observing a crane is to watch how they fly. Cranes will fly with their necks stretched outward, while herons tuck their long necks into an ‘S’ shape during flight. Have you ever spotted a hole high up in a tree while walking through the woods? Keep your eyes open, because there might be an owl residing in the hollowed-out space! Eastern Screech Owls don’t dig their own cavities, but instead rely on woodpeckers, rot, or squirrels to create the hole for them. In that sense, their motto could be, ‘work smart, not hard’.

During courtship, the male screech owl will ‘bow’ to the female, like a tiny pint-sized gentleman. The male may also present food to the female, an act known as ‘courtship feeding’. You could say they really know the way to their partners heart!

Here in the Bay, we have two variations of the Eastern Screech Owl – gray and red. The red ‘morph’ comprises around one third of the total population. These magnificent raptors are sometimes called fish hawks – a fitting name for a species that eats fish for 99% of its diet! Osprey were once considered endangered due to chemical pollutants like DDT, but their populations have rebounded dramatically, representing a significant success story in wildlife conservation. It is virtually impossible to visit the Chesapeake Bay from March to September and not hear or see an osprey, their shrill calls and large body size make them easy to spot.

In the winter, Osprey migrate south in search of better weather, sort of like my grandparents from Upstate New York who would spend their winters in Florida. The difference with Ospreys is that, although monogamous (spending their life with one partner), they split up during their winter migration to parts unknown. The female may visit Costa Rica while the male explores Venezuela, spending their winters in Central and South America.

What is most fascinating is that the pair of Osprey will return around the same time, to the same nest, year after year. Try doing that without Google Maps! Osprey can travel over 150,000 miles in their 20-year lifespans – however they never seem to complain about not getting ‘travel points’. The largest woodpeckers in North America, you may have had the chance to spot one of these birds coasting from tree to tree in a mature forest, or pecking away at a decaying log looking for insects.

Similar in size to an American Crow, Pileated Woodpeckers sport a large red mohawk; I like to think of them as the punk rockers of the forest. Similar to rockstars, they ‘drum’ on trees to mark their territory. These ‘ecosystem engineers’ modify their habitats by carving out large cavities in trees to nest. Rather than staying for multiple years, Pileated Woodpeckers will abandon their nesting cavity each year. Hey, some birds just like a change of scenery!

Thankfully, these abandoned nesting cavities aren’t usually vacant for long. A whole multitude of other wildlife may take up residence in an abandoned cavity, including songbirds, squirrels, owls, ducks, and even racoons! The Chesapeake Bay’s only breeding hummingbird species, Ruby-throated Hummingbirds are best described as small but mighty. The males sport a vibrant ruby-colored throat patch that they use to attract females, similar to humans wearing a nice outfit on a date.

Like some of us, Ruby-throated Hummingbirds have favorite colors: red, orange, and pink. They have a unique sense of vision that helps them ’see’ ultraviolet wavelengths to spot flowers that provide nectar, their primary food source.

In terms of speed, Ruby-throated Hummingbirds are the NASCAR racers of the bird world, their small wings beating just under 60 times per second as they move up to 30 miles per hour from flower to flower. Have you ever heard a sharp shriek while outside at night during the spring? You may have heard a Red Fox’s mating call – as a child these calls used to scare us before we knew what they were.

Red Foxes do not chew their food, but tear off sizable chunks and swallow them whole. Not great dinner etiquette but who are we to judge? Foxes have adapted well to suburban and even urban environments, and can seek out a wide variety of food, including human food scraps. My personal favorite fox behavior is the ‘pounce’, when they jump high in the air and land on their prey to catch a meal. Known by poultry farmers as ‘chickenhawks’, these sleek birds of prey use their forward-facing eyes to help them catch prey at high speeds. Cooper’s Hawks are primarily predators of smaller birds, but look out if you are a squirrel or chipmunk, because they are not too picky.

These accipiters (another name for their family of hawks) use their long, broad tails like a rudder through the air, steering them through woody areas in search of a meal. Sometimes they perch in tree branches or near your backyard bird feeder, waiting for an unsuspecting bird to turn its back. The bird world can be pretty gruesome!

Unfortunately for Cooper’s Hawks, their populations have been declining since the 1930s, partly due to their perception as a farm pest, and partly due to habitat loss. However, they are still considered a species of ‘Low Concern’, and you may be able to spot one hanging around your yard if you have bird feeders, looking for its next lunch. The regal Monarch Butterfly, a delicate but short-lived species, have a unique relationship with an important plant – milkweed. Monarchs rely on milkweed to lay their eggs, and Monarch caterpillars exclusively consume milkweed leaves as their diet. Toxic substances in milkweed are transferred into Monarchs, and many of their would-be predators have learned to recognize Monarchs and stay away!

Monarchs only live for a few weeks as adults, and can travel around 100 miles a day during their migration; embodying the term ‘living life in the fast lane’. Prior to their migration, around four generations of Monarchs will have come and gone each year!

Populations of Monarchs have been in decline, primarily due to habitat loss. Planting native species, including milkweed (Asclepias spp.) can greatly support these beautiful, iconic species. Ah, the Red-winged Blackbird, a common sight in any marshy area around the Chesapeake Bay.  Although they are one of the most abundant species in the Chesapeake Bay, their populations have been in decline due to complex changes, mostly stemming from human impacts to their habitat.

A sure sign of springs arrival, their cheerful calls are used to attract females, the males will also flash their bright red shoulder patches to warn other males and impress a potential partner. Red-winged Blackbirds are constantly busy during the breeding season, raising up to three broods per year. A new nest is built for each brood to prevent parasite infestations. Like us, Red-winged Blackbirds keep their space clean to avoid bugs moving in! While you may not see a Bald Eagle as often as a blackbird, their numbers have greatly increased since the 1970s, with population numbers showing no signs of slowing down. Although viewed as majestic and strong (which they are) Bald Eagles are opportunists –  eating trash, stealing food from other birds, and scavenging. Yes, they eat a healthy diet of fish, but we all crave a little ‘junk’ food now and then, right?

Bald Eagles hold the record for making the largest bird’s nests, some weighing between 1-2 tons! They will reuse their nest every year, and will continue to renovate and add new material to keep things fresh, like we might contemplate painting a room or swapping out the art on our walls.

The Bald Eagle is only found in North America, with a large breeding population right here in Maryland at the Blackwater National Wildlife Refuge! Although some ‘Baldies’ migrate, there are many who remain in the Chesapeake Bay year-round, giving you plenty of chances to spot one soaring overhead or diving down to catch a fish. Jack Turner is an Environmental Scientist and wildlife photographer, using his knowledge of local ecology to tell stories with his camera. He serves as the Secretary of the Severn River Association, a local environmental nonprofit, and leads kayak and paddleboard Eco-Tours for Capital SUP in Annapolis, MD. Jack lives in Annapolis. You can contact Jack via email at jackwildlifephoto@gmail.com and keep up with him on Instagram @jack_wildlife.