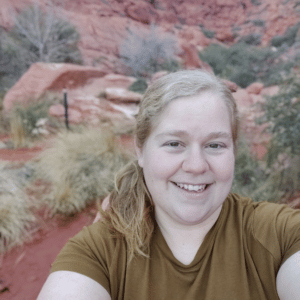 A born and raised Marylander, Cathleen was immersed in passion for the Chesapeake Bay watershed at a young age. As a kid this manifested itself in Girl Scout projects, fossil hunting on the Calvert County shore, and a propensity for trying to catch whatever bug was in the vicinity.

Fueled by those experiences, Cathleen ended up at the State University of New York’s College of Environmental Science and Forestry to pursue her higher education. She spent a year in the rural Adirondacks, earning her A.A.S. from the college’s Ranger School in 2013. A year later she completed her B.S. in Environmental Science at the main campus in Syracuse.

In 2015, Cathleen moved to Colorado to join AmeriCorps VISTA as the manager for the City of Rifle’s Main Street program. Working to increase local investment though special events and the city’s farmers market, she developed quite the knack for coordinating volunteers, organizing excel spreadsheets, and recognizing the value of active citizenship. In 2018 at Western Colorado University, she earned her Masters of Environmental Management focusing on sustainable and resilient communities by building a case to expand and appreciate the value of on-campus food production in higher education.

Prior to joining the Alliance in 2022, Cathleen was a seasonal ranger for Maryland State Parks. As the Pennsylvania Projects Associate, she works to coordinate, engage, and support volunteers in pursuit of a healthier Bay watershed.

In her downtime, Cathleen loves to read, dance, care for her exotic pets, and put too much old bay on her food. Her lifelong goals include riding a zero-g flight, attending San Diego Comic-Con, and publishing at least one book.