As our ‘Year of the Woman’ series rounds off for 2020, we would be remiss without recognizing a woman who has been pivotal to the Alliance’s work. Cindy Dunn, current Secretary of Department of Conservation and Natural Resources (DCNR) is a dedicated and down-to-earth environmentalist. Throughout her impressive career, Secretary Dunn has woven together a fascinating journey of restoration work throughout Pennsylvania. Years later, she continues to support advocacy for a watershed that supports over 18 million people.

From early on, Cindy had been exposed to the outdoors through her family. Cindy grew up among creeks and forest, and took family trips to the Bay. Having friends in college who were studying estuaries, Cindy decided to begin her career working with the Chesapeake Bay Foundation in Maryland as an environmental educator. It was there that Cindy truly fell in love with the Chesapeake Bay. Realizing connections between the health of land and water, she soon made her way back home to Pennsylvania to contribute to work upstream.

In the 1980s and 90s, environmental restoration work was only emerging. Cindy chuckled while recalling stories from the Alliance’s humble beginnings. She regaled me with tales of how, in a shared office space within a Dauphin County nursing home, residents would occasionally wander into her office wing to steal books. Or even, how in their urban office in Harrisburg, a squirrel would welcome her each morning through an open window to eat peanuts on top of their copier.

Despite overcoming the sometimes odd office arrangements, Cindy also had some tough mindsets to confront. At the time, most Pennsylvanian’s were still unaware of the Chesapeake Bay or even that the Susquehanna River drained into the Bay. The Alliance quickly became an early authority on the Chesapeake Bay matters, contributing publications and fact sheets that influenced others working in the watershed. Cindy truly enjoyed engaging with the public in this as she advocated for the Bay through partnerships, educational presentations, and organizing annual canoe sojourns down the Susquehanna River. “I didn’t chart a deliberate course for myself.”

By circumstance, Cindy was thrust into leadership. Having been trained as a biologist, she initially never considered herself a leader, preferring the scientist’s role. Secretary Dunn was brought on board by Fran Flanigan, the Alliance’s Founder and first Executive Director, who hired her to activate the Alliance’s work in Pennsylvania. She recognized that in order to change the status quo, it was important to step out of that comfort and to begin conversations. It was the actions of people and their connection to it that would ultimately affect the vitality of the Chesapeake Bay.

Cindy attributes a lot of her early career development to Fran’s mentorship. Fran created a space for citizens to have a voice and make decisions which would influence their Bay. As a model moderator and influencer, Fran was talented at summoning environmental leaders. Cindy observed how well Fran was able to invite the right people into a room, ask the right questions, and lead in a way that was not aggressive or dominating. Fran then provided her staff the skills to be leaders, not directly, but through example. Secretary Dunn explains,

“The power of anyone in the environmental world is the ability to convene and influence others.”

Due to both Fran, Cindy, and other staff leadership, the Alliance became the first Bay-focused organization to introduce restoration efforts to Pennsylvania. Through partnerships with Conservation Districts, they held workshops testing for nitrates in the groundwater. The notion that local water might be contaminated persuaded hundreds of people to show up! These workshops deeply engaged citizens around water quality issues and encouraged folks to work together, meanwhile influencing decision makers.

Secretary Dunn also offered advice for young professionals starting out. She simply says, “know yourself, know your strengths, and follow your passions. Don’t be too rigid, but let your path find you. A simple act of stepping up and volunteering can lead to new opportunities. Be open to advice from people who know you well, or might be further down the path than you might be. Keep moving forward, even if things get tough. And of course, don’t forget to keep a sense of humor!” Secretary Dunn is still planting trees after 25 years! On the left she is pictured at one of the Alliance’s early farm plantings in spring of 1995. In October 2019, she joined Alliance staff along Hartman Run at Shallowbrook Elementary School in York County. The project is part of a 17 acre riparian buffer installation, converting used school lawn to streamside forest.

Cindy reminds readers that it is important to take time to recharge in nature too. She recalls seasons where she was in the field planting trees every Saturday, from Easter to Memorial Day. Now, she makes sure to take hikes throughout Pennsylvania’s many protected forests. It’s clear just speaking with Cindy that joy and passion for the environment permeates her entire way of living. For her, experiencing other people’s engagement invigorates and inspires her in return. This confirms a sentiment our office staff has often referred to… that this work is contagious!

It was a true pleasure speaking with Cindy and laughing with her as she recounted stories of the ‘early days.’ Her dedication to this work is an inspiration to us all at the Alliance. Thank you Cindy for your unending support towards the health of our lands and waters! 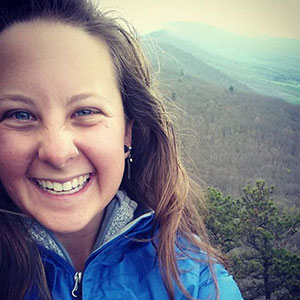