According to History of Juneteenth ©JUNETEENTH.com, Juneteenth is the oldest nationally celebrated commemoration of the ending of slavery in the United States.

On June 19th, 1865, Union army general Gordon Granger’s read the federal orders in the city of Galveston, Texas, proclaiming that all enslaved persons in the U.S. state of Texas were now free. This was two and a half years after President Lincoln’s Emancipation Proclamation – which had become official January 1, 1863. The Emancipation Proclamation had little impact on the Texans due to the minimal number of Union troops to enforce the new Executive Order. However, with the surrender of General Lee in April of 1865, and the arrival of General Granger’s regiment, the forces were finally strong enough to influence and overcome the resistance.

Below are a few events happening in the cities where the Alliance has offices, along with a few virtual events you can enjoy from the comfort of your home.

If you have an event you’d like for us to add to this list, please email us at info@allianceforthebay.org

On June 19, from 12 PM to 2 PM, a parade will take place to celebrate the Juneteenth holiday featuring community-based civic organizations, marching bands, dance squads, floats, and more. The parade will begin at the Annapolis City Dock with a community prayer, opening remarks and will end at the steps of the Maryland Hall with a brief ceremony, musical performance, and ringing of the freedom bells. The festival will close with a reading of the Emancipation Proclamation, theatrical performance, and tribute featuring local artists and creatives. 2–9 p.m. Bates Athletic Complex, Annapolis.
Visit annapolisjuneteenth.org for more information about this and other events! 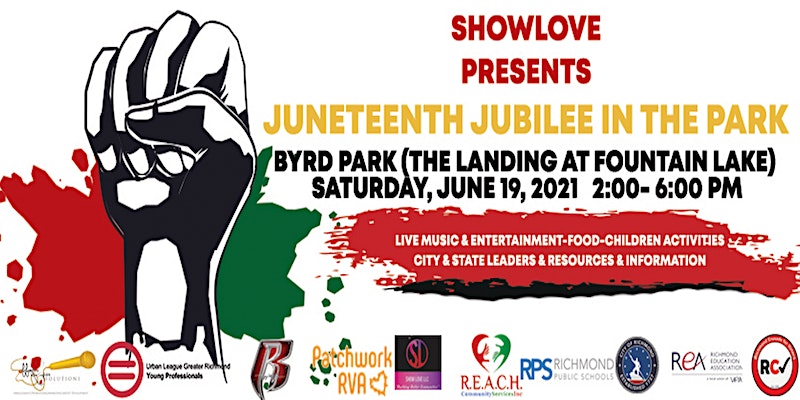 A coalition of City and State Leaders and Richmond-based community organizations will join together for a “Love and Legacy” Juneteenth Jubilee Celebration on June 19th between 2 PM and 6 PM. The event will include food truck vendors, children’s activities, music, dance, and other entertainment. Attendees will also have the opportunity to learn more about the resources available to improve their communities, including education equality, finance, behavioral health and healthcare equality, voter’s rights and restoration, and criminal justice reform.

ONE DC will be celebrating the grand reopening of their newly renovated Black Workers & Wellness Center from 1 pm to 5pm while commemorating the continued struggle for Black liberation and justice.

After 5 years of grassroots fundraising and 1.5 years of renovations, we are excited to reopen the Black Workers & Wellness Center, a community-controlled space in Anacostia where we organize for racial and economic justice through popular education, direct action, and worker-owned economic alternatives. We could not have gotten here without our members and supporters, and it’s time to celebrate!!

Juneteenth will feature tours of the BWWC building, live go-go music by local artists, a performance by the Black Workers Chorus, food vendors, mutual aid and community outreach booths, and more! Visit www.juneteenthdc.org for more information and to RSVP.

Several cities and counties in the Chesapeake Bay watershed are offering virtual events on Juneteenth and during the week leading up. Click the links below to see their full offerings.