Home / Blogs / The Return of the Wapiti: Elk in the Chesapeake Bay

The Return of the Wapiti: Elk in the Chesapeake Bay A group of elk crosses the Bennett Branch of the Sinnemahoning on a foggy fall morning (Photo by Jim Kauffman).

The year is 1877. It’s a foggy morning in the mountains of north central Pennsylvania. A hunter pushes his canoe upstream, hugging the shoreline of the Sinnemahoning. He watches for movement along the bank as he drifts silently through the morning fog. Before long, it will be dark and he’ll have to make camp for the night. It’s been a long cold trip and he is tired; he has paddled many miles upstream, his canoe laden with meat, hides, and furs. He approaches a small grassy glade just before nightfall and catches sight of what he has come for. He slowly reaches for his rifle and lifts it to his shoulder. The hammer drops, striking the frizzen. A flash, bang, and a puff of smoke. As the smoke clears, he paddles to the bank and pulls his canoe ashore. He stands over a downed wapiti. It’s a large bull, with an impressive set of antlers. He counts 15 points, dark chocolate in color with white tips. He removes a knife from his sheath and kneels. He will have to work quickly to avoid drawing the attention of bears and panthers. The sun sets as he prepares strips of salted meat for the fire. He will camp here for the night before heading downstream the next morning to make for town. This kill will bring much attention upon his return, as elk have become scarce in these parts and he may even be able to sell the head and hide to the highest bidder. The hunter will make this journey upstream for many more seasons, but will never harvest another wapiti. Unbeknownst to him, he has just killed the last wild Pennsylvania elk.

The year is 2021 and it’s mid-September. The misty morning air of north central Pennsylvania is cool. Fog hangs low in the valleys and the grass is wet with dew. As the sun begins to rise the Allegheny mountains take shape, framing the expansive grasslands in pre-dawn light. It’s quiet, except for the occasional passing truck and hushed whispers from the crowd. Somewhere in the distance, a bull elk bugles and the hushed whispers become excited whispers. Hands go up and fingers point as a group of cows run excitedly through the field. A giant bull emerges from the fog behind them. He stops, lowers his head, flares his lips, and bugles. Steam emerges from his mouth and his antlers swing over his back. Onlookers gasp in awe. Camera shutters click almost constantly. The bull chases his harem of cows across the field. Cars pull over and people emerge from their vehicles, creating a traffic jam in an effort to catch a glimpse of this impressive bull. He bugles again, just before crossing the road and chasing his cows out of sight into a wooded valley. The crowds disperse and head back to their camps for breakfast, maybe stopping at the elk country visitor center or a local gift shop along the way. A bull elk bugles to advertise his presence during the September breeding season (Photo by Jim Kauffman).

A History of Elk in the Chesapeake

While these are both fictional accounts, they could easily be true. The last native eastern elk (Cervus canadensis canadensis) in Pennsylvania likely died sometime in the 1870s. Whether it died at the hands of man or died a slow, lonely death- one can only speculate. But thanks to the foresight of Pennsylvania’s state wildlife management agency, the mountains of north central Pennsylvania once again reverberate with the sounds of bugling bull elk.

Elk were once much more widespread in North America, with populations occupying suitable habitats both in the western states and here in our eastern forests. The eastern elk subspecies roamed throughout the Chesapeake region, occupying dense forests, river valleys, meadows, and small grassy forest openings (glades). The native American peoples called elk ‘wapiti,’ which loosely translated to ‘white deer.’ A member of the deer family, elk are large herbivores that tend to travel in herds. Each year the male elk (or bulls) grow and later shed an impressive set of antlers.

After European colonization, years of unregulated hunting and habitat alteration led to significant declines in elk populations as colonists spread into the continent’s interior. By sometime in the late nineteenth century, the eastern elk subspecies had gone completely extinct. Following the disappearance of the native eastern elk, the Pennsylvania Game Commission (PGC) made the decision to reintroduce elk to their former haunts within the mountains of Pennsylvania. In 1913 the PGC began the process of restoring elk through a trap-and-transfer program. Rocky mountain elk (Cervus canadensis nelsoni) were purchased from Yellowstone National Park and shipped to Pennsylvania in boxcars on a train. Miraculously, many of the elk survived their journey and were released into the wilds of north central Pennsylvania. In subsequent years, the PGC would purchase and ship more elk to Pennsylvania, releasing them in multiple counties throughout the north central and northeastern region. Those individuals are the ancestors of all the elk that roam Pennsylvania today. 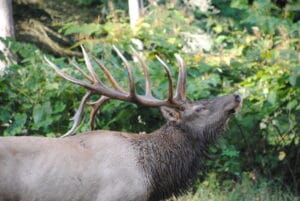 The Pennsylvania ‘elk range’ has become a popular tourist destination for those that seek elk and wild places. The elk range consists of a large area in north central Pennsylvania comprised of steep mountains, winding river valleys, grassy forest openings, and small rural communities. The primary elk range includes portions of Cameron, Elk, Clinton, Clearfield, and Centre Counties. This region is heavily forested, contains few roads, and is fairly undeveloped. Elk inhabit forest communities throughout this region, but gravitate to grasslands, meadows, and food plots for forage. Elk are considered grazers, preferring to forage on grasses, legumes, and other herbaceous vegetation that can be found in these openings. The PGC actively manages habitat to benefit elk and other wildlife and many former strip mines in the region have been converted to grasslands and meadows. Openings within the forest are planted with grasses and other forage species that elk rely on for food. The PGC has also actively developed multiple elk viewing areas for people to look for elk during their visits to the region. These viewing areas contain educational information and allow visitors to safely observe elk. Most people visit the elk range during the September breeding season, or ‘rut’, when temperatures are cooler and bulls are bugling. During the rut, bull elk ‘round up’ females for breeding and are often much more visible in open fields and forest meadows. The bulls ‘bugle’ to advertise their presence and attract females, and it is a sound like no other in nature. I would encourage you to take a trip to the elk range during the September rut to experience it for yourself. A group of people gather at an elk viewing area near Benezette, PA (Photo Jim Kauffman).

Pennsylvania Game Commission biologists actively study the elk herd to ensure their health and prosperity. Annual surveys are conducted to monitor population numbers and population estimates are then used to make decisions on how best to manage elk. This includes reducing human-elk conflicts, protecting agricultural crops, balancing the elk population with the available habitat, monitoring disease, and providing opportunities for recreational harvest. During the elk hunting season, harvested elk are brought into a ‘check station’ and biological samples are collected to monitor the health of the herd. Annual field research also includes capturing living elk to study their behavior. Live-capture and tagging elk helps biologists to gain insight on population numbers, using a method known as ‘mark-recapture’ to estimate the herd size. Fitting some elk with radio collars allows biologists to monitor elk movements on the landscape to determine home range size, habitat use, movement patterns, and foraging preferences. These collars periodically emit a signal with the animal’s location that biologists can then record. PGC biologists also utilize aerial surveys using aircraft to physically count elk on the landscape. Many other aspects of elk ecology and biology are monitored by biologists to ensure that elk continue to thrive within the Pennsylvania wilderness. An elk calf is fitted with a radio collar to provide data on its home range, movements, and habitat use (Photo Jim Kauffman).

Pennsylvania currently holds three elk hunting seasons each year. Archers have the opportunity to pursue elk with a bow and arrow during the September rut. A general ‘rifle’ season is held in November, and a ‘late’ season runs through the first week of January. Elk hunting in Pennsylvania is highly regulated, to ensure that management objectives are met while the elk population remains stable. PGC biologists use research data to decide how many hunting tags are issued and where those tags can be applied. The PA elk range is divided into hunting ‘zones’ with a specific amount of tags in each zone. Each year, a lottery is held to award tags to lucky elk hunting applicants. Almost 50,000 people apply each year for a Pennsylvania elk tag and with fewer than 200 tags issued each year, drawing a tag is a cherished opportunity indeed. The revenue generated from hunting license application fees is used by the PGC for many aspects of elk management, including research and habitat improvement projects. A cow elk is harvested by a hunter during Pennsylvania’s elk hunting season (Photo Jim Kauffman).

The Future of Elk of the Chesapeake Bay Watershed

In addition to Pennsylvania, other elk reintroduction projects have occurred in the eastern United States, some just outside of the bay region. Elk herds are now established in portions of West Virginia, Virginia, North Carolina, Tennessee, and Kentucky. Unfortunately, it is unlikely that elk will repatriate most of their former range here in the Chesapeake region. Elk are very large herd animals that require a lot of space and a lot of food. They can cause conflicts in suburban environments, negatively impact agricultural crops, and become hazards on interstate highways. For this reason, natural resource agencies work to restore and manage elk populations in regions where suitable habitat and space exists. This is most often areas with expansive forests, few roads, and few people. The ability of the landscape to support elk populations is a testament to the importance of conserving wild places and contiguous forest habitats.

In today’s developed world it’s sometimes hard to envision the vast herds of elk and other wildlife that once roamed the forests, meadows, and bays of the Chesapeake Bay watershed. But a trip to Pennsylvania’s elk country provides a glimpse of what that spectacle was once like. Visiting elk country is like traveling back in time, giving us the opportunity to experience the Chesapeake wilderness that once was. 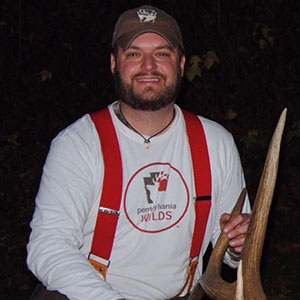