“Hey Rob, can you write an article for the newsletter? Maybe something that showcases the wildlife of the watershed. Something that makes people feel good, gives them warm and fuzzy feelings.” Hmm fuzzy… I know just the thing!  Spiders!  Everyone likes spiders!

Now before you say “Nope” first of all, think of something original to say! Second, it’s time you learn more about this stuff.  I can’t keep answering your spider questions. I mean I can, and will (and like to!) but as the saying goes, if you give a man a fish, he’ll eat for a day, if you teach him about a fishing spider, he’ll think they’re cool.  I know that’s not how that saying goes, but here’s the thing:  there are a lot of different spiders out there and almost no one knows what they are and they’re afraid of them!  To remedy that a bit, I’m going to pull back the bark on a dead tree and introduce you to some of my favorite water walkers, the fishing spiders!

Fishing spiders are one of the largest spiders that you will encounter in the Chesapeake Bay watershed, being outsized by only some particularly beefy specimens of wolf spiders (we’ll circle back to that later). Fishing spider demonstrating its leg span. Measured using a tape in tenths of a foot (nerd inches). For normies, this is about 2.5”. Photo Credit: Rob Frank

They get their name from their habit of running along the water surface or living near water.  Do they fish?  A fishing spider will eat whatever it can catch, including fish, but it is usually insects that make up its diet. This includes water striders, another denizen of the water surface. Imagine being a water strider and feeling so lucky to be able to skate along the water’s surface only to find out that you have to share the neighborhood with a giant spider that wants to eat you.  Total bummer. Dolomedes is the genus for the fishing spiders and in the Chesapeake Bay watershed, there are a number of different species with different patterns and sizes.  Most show an affinity for staying close to water though some, like the Dark Fishing Spider (D. tenebrosus), will wander some distance away and are often found on trees, docks, or outbuildings nearby. A Dark Fishing Spider (D. tenebrosus) hanging out on an outhouse door at night. I’m showing her my pocket knife. She said it was cool but I could tell she wasn’t impressed. Photo Credit: Rob Frank

Due to their large size and dark hairy appearance, they are often mistaken for wolf spiders. Understandable, but wolf spiders are usually lighter colored and have different markings on the body and the legs.  A key difference is the configuration of eyes:  fishing spiders have two rows of 4 eyes facing forwards and wolfies have two medium eyes on the side and two big ones looking forward with a row of 4 small eyes underneath. Have trouble making eye contact?  Wolf spiders usually arch their legs while fishing spiders often take a flattened leg posture on surfaces, making them look like a beautiful starfish on the underside of a bridge right behind the intern’s head (shhh!  It’s better they don’t know!)

Another spider that people think fishing spiders are is the brown recluse which is bonkers because brown recluse spiders have 6 eyes, a characteristic fiddle shape on their back, are much smaller, not hairy, and, get this, THEY DON’T LIVE IN THIS AREA!  Look it up!  It’s true!  Even though your uncle says he has them in a web by his porch light every fall! It’s not a brown recluse.  Also, they don’t make webs like that, also… ok I’m dropping it.  Sorry.

The one thing everyone wants to know about a spider is “will it kill me?” and the answer is no.  No, it won’t. It won’t hurt you. It’s not after you. You’re fine.  It’s all going to be ok. Fishing spiders aren’t aggressive towards people and bites are rare unless they are handled. The bites are apparently on par with a wasp sting, but I wouldn’t know personally as I don’t pick up large spiders without gloves. I pick up lots of things without gloves and if it can find a way to bite me it invariably does. Remember: anything that can bite you will if you bother it.  Take it from me, a guy that likes to learn lessons the hard way. The last cool thing I want to tell you about fishing spiders comes from their taxonomic name. If you aren’t familiar, a taxonomic name is the biological classification given to a living thing so that it has a scientifically agreed upon name that doesn’t need to be clarified in different languages or regions. This helps to clear up misunderstandings if someone says “bug” we know they mean something in the order Hemiptera (True Bugs! (Bug is a real term for certain types of insect! Thank me when you get this right at trivia)) of class Insecta (Insects, generally 6 legged) and not fishing spiders which, of course aren’t even insects at all, but in the order Araneae (spiders) of class Arachnida (arachnids, generally 8 legged arthropods). Easy right?  Who could ever mess that up! Anyway, fishing spiders are the in the nursery web spider family (Pisauridae).  That name hints at their habit of carrying around their egg sack in their chelicerae (basically jaws) while the eggs are incubating.  When they are ready to hatch, the sack is attached to a surface, usually under plant foliage, and the mother makes a “nursery web” for them, and will guard them. What a great mom! There should be Mother’s Day cards with pictures of fishing spiders on them! I don’t know why the greeting card company never responds to my emails about this.

So that’s the lesson about fishing spiders! I think they’re great. Maybe when you see one, you’ll know a little more about it and think about their cool little world.  The wild things of the Chesapeake come in all shapes and sizes and if you find them and you’re patient, they’ll do something amazing.  Keep your eyes open, even if you only have two! 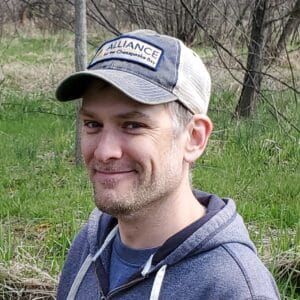 Forests for the Bay Staff Blog