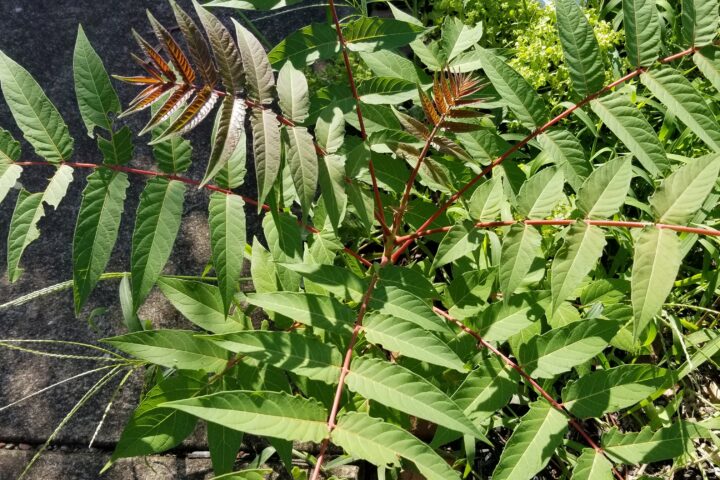 An Ailanthus seedling growing through cracks in concrete in Lancaster, Pennsylvania. The reddish tinge of new leaves are a trait that often helps spot the plant from a distance. Photo by Ryan Davis.

Tree-of-heaven (Ailanthus altissima): a tree that elicits curses and anger wherever it grows and is recognized. The non-native plant’s angelic name belies its destructive nature. It spreads prolifically by seeds and root sprouts, forming thick groves that completely dominate sunny areas within just a few years. Beneficial native plants are quickly outpaced, shaded out, and replaced by the invader that provides little to no value in our ecosystems. It’s always a good idea to remove Ailanthus, but late summer is the best time to identify and combat the tree. Additionally, fighting tree-of-heaven has never been more urgent; it is a host of the spotted lanternfly, an imported pest insect that has the potential to devastate eastern forests. An Ailanthus seedling growing through cracks in concrete in Lancaster, Pennsylvania. The reddish tinge of new leaves are a trait that often helps spot the plant from a distance. Photo by Ryan Davis.

Native to China and Taiwan, Ailanthus was introduced to North America by a Pennsylvanian gardener in 1784. Its fast growth and exotic looks made it a popular ornamental tree, and it was commonly grown in nurseries by the 1840s. Less than a century later, it had spread by wind and well-meaning human to 42 US states and two Canadian provinces. It grows well in most sites, from partially shaded floodplains to seemingly sterile scree slopes, and is a dominant invader in urban areas where compacted, impoverished soil prevents many other woody plants from successfully establishing. It is still most common and invasive in urbanized areas of the mid-Atlantic and New England where it was initially introduced, but readily invades mature forests and disturbed areas alike.

Tree-of-heaven is exceptional at reproducing. It can begin to fruit in its second year, and while individuals typically produce thousands of seeds, some have been documented to produce well over 2 million seeds in a season. The fruit is an oblong samara, a papery wing (like maple “helicopters”) that allows the seed to disperse in the wind. And Ailanthus does this well; samaras can spread over 300 feet (yes, a full football field) from the parent tree. Its most common method of reproduction, however, is by sprouting from roots. Sprouts have been found 90 feet from their parent tree, and even seedlings can send up sprouts from their roots. One of the most notable traits of tree-of-heaven is its aptitude for stump sprouting; cutting a tree down will result in scores of sprouts the next year, and they grow quickly. Its propensity for rapid growth is why the plant is called tree-of-heaven, and this is well-deserved: in the mid-Atlantic, stump sprouts average 6 feet of growth each year, while root sprouts average 2.7 feet and seeds average 1.3 feet. Not only is the tree adept at spreading, but it is also allelopathic, meaning it produces chemicals in its tissues that inhibit the germination of many other species.

Ailanthus has distinctive characteristics in all seasons, but is still commonly confused with native look-alikes, especially sumacs and black walnut. Tree-of-heaven has smooth, light gray bark with light striations, reddish brown twigs with round white lenticels, and heart-shaped leaf scars. It has compound leaves with 10 to 41 leaflets that hold a reddish tinge when new. The margins of each leaflet are smooth, with the exception of one or two teeth at the leaflet base, which each hold a small gland. These glands, and other tissues to a lesser extent, emit a distinctive smell reminiscent of burnt or rotting peanut butter when damaged. This may be hard to imagine, but it is a smell that is immediately diagnostic; you’ll know when it’s Ailanthus you’re smelling. From a distance, the flowers and fruits give tree-of-heaven away during the summer and fall. The flowers are a whitish, yellowish, green color that develop into pink or red clusters of samaras. These messy, asymmetrical piles can be seen from a distance and immediately distinguish the trees from staghorn sumac which can otherwise look similar from afar; the “stag horn” refers to a tight cone of fuzzy red fruits that appear at roughly the same time as Ailanthus samaras. When up close, the native look-alikes can be distinguished by their serrated leaf edges and lack of a distinctive smell when crushed. Tree-of-heaven is legendary among professionals and landowners for being hard to kill. Recall its propensity for fast-growing, prolific sprouting before simply cutting a stem down. The saying goes: “Chop down a tree-of-heaven, and 20 of its friends show up for the funeral”. Cutting or breaking stems will only truly kill seedlings less than 6 inches tall. It is nearly impossible to remove an adult tree-of-heaven’s root mass entirely, so the best course of action is to use herbicide. Apply a systemic herbicide with active ingredients containing glyphosate or triclopyr from July through the fall when Ailanthus leaves begins to change color. This period is when the tree is transporting sugars to its roots, and will result in the chemical traveling throughout the plant’s system, (hopefully) killing it entirely. Herbicide can be applied foliarly, but most people prefer basal bark (painting the base of the tree with a tryclopyr-based chemical) or hack-and-squirt (cutting through to wood about ¾ of the way around the tree and spraying herbicide into the wound) applications to be more selective. Do not cut the stem without applying herbicide to the stump, unless the tree has been clearly dead for over a month. As soon as the Ailanthus has been successfully removed, replace it with a patch of vigorous native plants to shade out potential seedlings that may surface. Ailanthus bark is smooth with light striations, even at large diameters. Photo by Ryan Davis.

A biocontrol method using the native Verticillium nonalfalfae fungus is currently being tested in Pennsylvania. Early efforts report quick mortality of Ailanthus, with little threat to non-target species. The approach may soon be approved and the fungus widely available for use, but until that time it is recommended to combat tree-of-heaven with herbicide.

This may seem like a lot of work, and it really is. But controlling Ailanthus, and other invasive species, is an incredibly urgent and important management action. Non-native plant species provide very little food for native herbivores; most species have evolved the ability to consume vegetation that exists in their respective habitats, but cannot digest plant matter from elsewhere. Highly invasive plants, like tree-of-heaven, compound this issue by quickly spreading and outcompeting native species. So the invasive plant not only offers no food for native fauna, but gradually eliminates other food sources. A dense patch of Ailanthus looks lush, but contributes to the ecosystem as much as a pile of concrete would. There is a certain insect that uses tree-of-heaven, but it’s shaping up to be just as hellish as its host plant. The spotted lanternfly (Lycorma delicatula), native to China and southern Asia, has (as of July 2018) spread to thirteen counties in southeastern Pennsylvania and one county in Virginia. It feeds on plants by sucking sap, which can weaken the host, and in cases of severe outbreaks can cause plant death. The planthoppers also secrete “honeydew”, a sugar-rich waste liquid, which coats plants and can reduce photosynthetic capacity and cause mold outbreaks. The two impacts combined have already resulted in the destruction of many native plants, including valuable species for forest products, and many important orchard crops. The spotted lanternfly is a generalist, but is commonly attracted to Ailanthus, and a prevailing thought is that the insect cannot complete its life cycle without feeding on tree-of-heaven. All the more reason to start killing Ailanthus on your property!

For more information on controlling invasive species and many other forest management topics, visit forestsforthebay.org or email Ryan Davis at rdavis@allianceforthebay.org.

To learn more about the spotted lanternfly, visit: https://ento.psu.edu/extension/fruit/pest-alert-spotted-lanternfly