Carnivorous Plants of the Chesapeake Bay 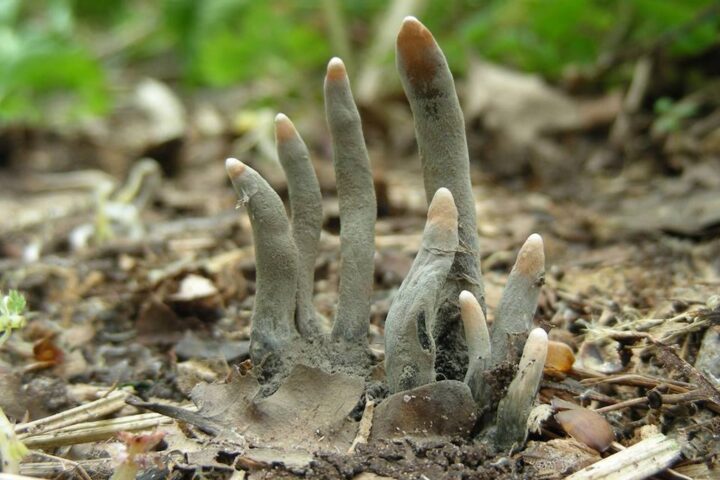 For some, fall weather and thoughts of Halloween bring to mind spooky decorations. Often those decorations include sticky spider webs and bubbling cauldrons of unknown substances. But did you know that our plant world has its own spooky substances? In fact, various types of carnivorous plants lurk within the Chesapeake Bay watershed. Like spider webs, some of these plants catch prey on their sticky surfaces, while others have their own versions of cauldrons: liquid-filled structures teeming with digestive enzymes that are waiting for the next meal. A Drosera spp. slowly curls its tentacle around an insect. The small reddish hairs are coated with a sticky enzyme substance that traps and breaks down the creature. (Photo credit: NWF)

The carnivorous plant that people most often think of is the Venus flytrap, Dionaea muscipula. Pop culture is riddled with examples of them, from the Piranha Plant in Super Smash Bros, to Cleopatra in The Addams Family, to Audrey II in Little Shop of Horrors. However, the Venus flytrap is only one of 20 different genera of carnivorous plants. There are bladderworts and butterworts, sundews and sun pitchers, monkey cups and turtle socks (also called pitcher plants, but don’t you just love the image of turtles with socks on?). These plants use a variety of mechanisms to trap their prey: pitfalls, flypaper, snap traps, bladder traps, lobster pot traps, or a new favorite, the catapult-flypaper trap (Poppinga, 2012).

But why do these plants resort to carnivory in the first place? Just to trick, and not to treat, the insects that come knocking at their plant doors? A view from above shows the low-lying Drosera spp. Sticky tentacles are extended and waiting for anything to trigger them. (Photo credit: Ryan Davis).

Let’s take a look at the genus Drosera, or the sundews. Like their fellow carnivorous plants, they grow in areas of low-nutrient soils like acidic bogs and fens. Due to a lack of nutrients in the soil, specifically nitrogen, these plants have adapted to use insects as their primary nitrogen source. Drosera have “tentacles” that latch onto their prey and secrete digestive enzymes, coating the insect. The tentacles then slowly curl around the prey, preventing it from escaping, and the oozing enzymes break down the insect until only its exoskeleton remains. Two of the sundews found within the Chesapeake Bay watershed are Drosera brevifolia and Drosera filiformis. Using their modified “spider webs,” they snag their prey, leaving behind a tiny graveyard of insect exoskeletons. Sarracenia purpurea is shown growing in an acidic bog. The stalks of their flowers extend up away from the ground and are waiting to be pollinated. (Photo credit: Ryan Davis).

Another carnivorous plant in the watershed comes from the pitcher plant (or turtle sock) genus. Sarracenia purpurea, the purple pitcher plant, can be found fairly widespread up the east coast of the US and across the northern states into Canada within acidic bogs and fens (USDA). Their leaves are modified into tiny “cauldrons” (more officially known as phytotelmata) that contain a mixture of rainwater and digestive juices (Kitching, 2000). Nectar and plant coloration lures insects in and as they rest on the edge of the plant, they occasionally slip into the lurking waters below. There they are broken down into a nutrient stew which is absorbed by the plant.

These plants are only a sampling of the carnivorous diversity found within the Chesapeake Bay watershed. The bogs and fens that are found within it are home to these special plants, among many others. Yet as spooky as these carnivorous plants may sound, they still need your help to flourish. Illegal poaching along with a shrinking habitat has led to their decline. Due to their unique characteristics like high acidity and saturated soil, bogs already have a limited presence throughout the watershed. Increased sediment, reduction of acidity, and woody invasions are all issues facing this unique ecosystem (“Bogs,” Anne Arundel County). Support the work of organizations like the Meadowview Biological Research Station and never poach plants from their natural habitats. Doing your part can help prevent our natural areas from turning into ghost lands of past plants!