We highlighted two types of edible plants you can forage for in our July and August episodes of Tree Talks. On the other side of the spectrum are dangerous and toxic plants to avoid. Here is a list of some of the most poisonous plants in the Chesapeake Bay Watershed. 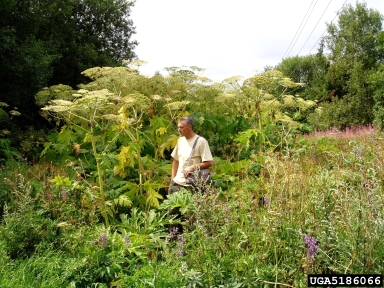 You might recall the giant hogweed made national news last year when a Virginia teen suffered severe burns after coming into contact with the plant. The plant sap contains furocoumarin, a toxic compound that triggers phytophotodermatitis on skin when exposed to UV radiation. This reaction results in severe burns, skin rashes, and blisters that may lead to semi-permanent scarring. Sap in the eyes may cause permanent blindness. Scary stuff! Giant Hogweed originates from Eurasia, and was brought to North America as an ornamental garden plant. Hogweed grows on disturbed soils, such as stream banks, roadsides, right-of-ways, and fallow fields. Its flower cluster makes it mistakable for cow parsnip, angelica, Queen Anne’s lace, and wild parsnip, but it is distinguishable from these other plants by its massive size. When flowering, the plant can reach 8 to 14 feet tall. Giant hogweed is present in New York, Pennsylvania, Maryland, and Virginia.

Poison hemlock shoulders an infamous folklore. The plant originates from the Mediterannean region. A tea steeped with the plant’s seeds are attributed to poisoning the Greek philosopher Socrates; according to Christian mythology, hemlock became poisonous after growing on the hillside of Jesus’s crucifixion. Whatever its sensational history, you are most likely to be harmed by poison hemlock today in a case of mistaken identity. The plant and its roots appear similar to parsley or wild parsnips. The plant’s toxicity is due to high concentrations of the chemical coniine. Coniine paralyses the motor nerve endings of the skeletal muscles and depresses the autonomous nervous system, causing the toxic effects. Symptoms of poisoning include salivation, vision impairment, stomach pain, seizures, paralysis, coma, and if consumed at a high dosage, death. A member of the carrot family, the stalk grows 6 to 10 feet in height with small white flowers in distinct clusters. Like giant hogweed, it grows primarily on disturbed soils and is found throughout North America.

Please note that although it shares a common name, the eastern hemlock (Tsuga canadensis) is not poisonous. In fact, hemlock needles have a high vitamin C content and were steeped by native Americans and white settlers for tea. The first North American native plant on this list, water hemlock is an estimated ten times as poisonous as poison hemlock. The water hemlock contains the chemical cicutoxin that acts to prevent functioning of the vital neurotransmitter GABA. Symptoms of poisoning include nausea, vomiting, and seizures, and severe poisoning may result in respiratory paralysis. Also a member of the carrot family, the small white flowers grow in an umbrella-like cluster and the leaves are long and tri-pinnately compound. 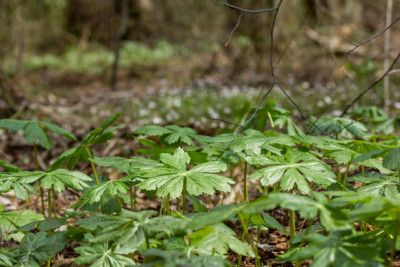 Although listed here as a toxic plant, a mayapple fruit found during the right time of the year is edible! The mayapple is a native plant, and was foraged by Native Americans. Since an edible mayapple is relatively rare, survivalists and foragers highly prize the fruit. Other than the ripened fruit, all parts of this plant are poisonous. The mayapple is very recognizable because it is divided into a palm-like appearance with the illusion of many leaves, even though it technically only has one leaf per shoot (palmatisect arrangement). Symptoms of mayapple poisoning include nausea, diarrhea, multi-system organ failure, and potentially death. Podophyllum is the chemical responsible for this plant’s toxicity, inhibiting normal cell function by preventing the production of new cells in the body. For more information about poisonous plants, check out The Socrates Project: Poisonous Plants in Virginia.