Otherworldly Creatures: you have to see it to believe it!

Folklore is a popular topic of conversation this time of year, and the Philippines, a country consisting of more than 7,600 islands in Southeast Asia in the Pacific Ocean, generates its fair share of ancient, creepy and mythical beasts. Consider the aswang (or evil shape shifter) known as Gumon. The Gumon literally has killer hair – she stalks unlucky bystanders after dark as a crawling mass of stinking, tentacle-like hair, engulfing, strangling and suffocating her victims while draining their life force. 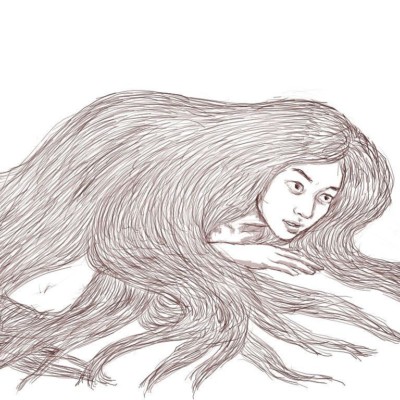 Similar? Yes or no? You decide! (Left) Artist’s rendition of the aswang, Gumon . (Right) Monkey slug.

Zoinks! You wouldn’t want to bump into Gumon in a dark alley but you might encounter an equally strange, and strikingly similar, creature in the forests and fields, albeit on a much smaller scale. The larvae, or caterpillar, of the Hag Moth (Phobetron pithecium) is commonly known as the Monkey Slug, but I think it bears an eerie resemblance to Gumon due to its appearance and shape shifting life cycle.

The bizarre, furry Monkey Slug is only about 5/8” long, but its octopus-like arms extend and reach out as it slowly glides along. The head is hidden in the thorax, so it appears as if no head exists under all that fuzz. The nine pairs of fleshy lobes are actually modified legs and the 3rd, 5th and 7th lobes are typically long and twisted, giving the larvae the “disheveled look of a hag” or, in my opinion, looking uncannily like a Gumon. These long lobes are delicate and may break off. Colors vary, too.

The stinging hairs of the Monkey Slug do not suck the life out of its victims, but do serve as the primary defense against predators. The specialized spines are hollow and contain toxins from the poison gland cells to which they are joined. Take care if you handle one of these hairy critters – sensitivity depends on the individual.

Monkey Slugs and their adult form, Hag Moths, are found from Maine and Quebec south to Florida and west to Nebraska, Arkansas and Mississippi. Host plants for the caterpillars include mostly woody trees like apples, ashes, birches, chestnut, dogwoods, hickories, oaks, persimmon and willows. The adult moths are not commonly seen during the day, but are found in forests and fields from late spring through late summer (May to September). Hag moths are very furry with tufts of hair on every leg, black or dark bodies and a wing span of about an inch, give or take. The male moths have translucent wings with black veination and margins, but the females have dark yellow and brown mottled wings. The ladies also boast light, ivory-colored tufts of hair on their legs.

So, on a dark and stormy night this holiday season, don’t stray too far from the wooded path…